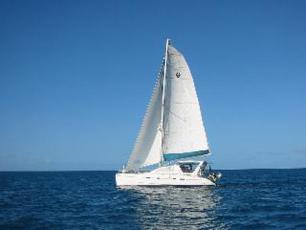 Robertson and Caine - Production Achievements as of July 2010:

• Over 550 catamarans launched,
• More than 4 million bluewater ocean miles of deliveries from Cape Town, Africa alone
• Bluewater deliveries amount to more than 10 round trips to the moon
• Millions of satisfied miles of cruising,
• Robertson and Caine are now the third largest manufacturer of sailing catamarans worldwide.

Hand-built by master craftsmen in the Cape based boat yard, Robertson and Caine have impressive heritage.

MTB's History: MTB was sold new by the Moorings (yacht brokers) to a couple in Canada. After a short time, she was sold to Captain Joe, in Key West, Florida. Due to changing circumstances, the next year, Captain Joe re-listed her with the Moorings in Ft. Lauderdale. On June 16th, 2006 she became the pride and joy of Ken and Cindy and was US registered with Brunswick, Georgia as her hailing port.

MTB Equipment: MTB has two 40 hp Yanmar engines; a Northernlights 6 kw generator; three diesel tanks hold a total capacity of 148 gallons. Airconditioners manufactured by Cruiseair (2 zones), total 6 batteries aboard. The radar, auto pilot and chart plotter are Ratheon. There is a 6 Plastimo man life raft Maximum persons on board by design is 8 and the maximum recommended load including water/fuel is 5,250 Kg.

MTB Amenities: She boasts three large cabins, each having adjacent heads with sink and shower. The galley is complete with an ice maker, microwave, gas stove/oven, refrigerator, freezer and Corian counter tops. The salon has a built in sofa that seats 8, flat screen tv with Follow Me satellite tv, stereo system, built in bar and navigation station. The owner's suite includes a walk around queen size bed, closets, built in storage cabinets, office area with desk, and the head with glass doors on the walk-in shower. MTB is equipped with a washer/dryer, out door shower, wine cooler, water maker, and two zoned hvac - heat/air conditioning. The outside space has two trampolines forward and a seating area/cockpit with Captain's helm aft. The cockpit has large seating areas and table, fully covered by the hard top, fiberglass bimini top. Dingy 10' with 8 hp Honda motor. Two sea kayaks on deck. MTB truly is our floating condominium (with no regime fees or homeowner's association to deal with!).

Print | Sitemap
Copyright 2006 and for each and every year, thereafter. All rights reserved meaning that no text, format nor photos included herein may be copied nor used for any purpose without direct permission from either Ken or Cindy Miller - Meantobie.com, Meant To Be, All Rights Reserved
Login